Sengakuji is a famous and popular Buddhist temple known throughout Japan.

There are numerous Buddhist lineages and Sengakuji belongs to the “Soto” Zen school. Soto Zen has two large main temples, Eiheiji on the northwest coast and Sojiji near Tokyo. Zen Master Dogen introduced the Soto lineage to Japan and founded Eiheiji. Master Dogen’s main written work, “Shobogenzo”, expresses his understanding of Buddhist practice and doctrine. Currently there are many translations available.

Buddhist teachings inform that all of us can actually live as Buddha by acting sincerely and being guided by all--embracing wisdom and deep compassion. Master Dogen taught that Zazen(Buddhist meditation), when practiced beyond discriminating consciousness, is the very present realization of Buddha. He widely recommended Zazen and it was his firm belief and cherished wish that this practice could form the base of an authentic “Way” or means of salvation.

Sengakuji was built by Tokugawa Ieyasu, the first Shogun of Edo era, in 1612 near Edo Castle as an establishment of Dogen’s tradition. However, after only 30 years, it was devastated by fire and this led to a reconstruction at the present site.

Sengakuji is now regarded as a temple closely related to the Ako Gishi, but it was in fact one of the three principle temples of Edo(old Tokyo) and known in its own right as a prestigious Buddhist institution. Many dedicated monks gathered from all over Japan (it was said that numbers sometimes reached 200) to deepen their practice and study. To this day this tradition continues. Numbers are considerably less, but young training monks still practice here whilst studying Buddhism at university. 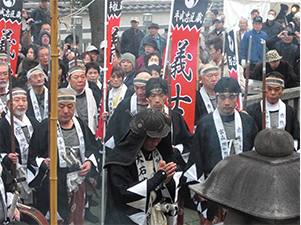 Perhaps the most famous story of avenge in Japanese history is the Ako Incident which took place between 1701-1703.

Asano Takuminokami, Feudal Lord of Ako, was appointed by the shogunate to entertain the imperial envoys visiting Edo from Kyoto. He was to seek directions from his official advisor, Kira Kozukenosuke. But Kira disliked Asano and treated him with malice and disgraced his honor as a samurai.

Unable to tolerate Kira's insult anymore, Asano drew his sword on him in the Edo Castle at what is known as "The Pine Gallery (Corridor) Incident". Asano managed to cut Kira on his forehead and shoulder but failed to kill him.

It was strictly forbidden to draw one's sword within the Edo castle at that time and Asano was immediately arrested. There was also a law termed "equal punishment for quarrels" which punished both samurais involved in a fight so both Asano and Kira were expected to be punished. However, while Kira received no punishment, Asano was sentenced to death by seppuku (hara-kiri) in a garden of another lord's residence on the very same day without proper investigation. Seppuku outside in a garden was for a felon and inappropriate for someone of Asano's standing. Further, the Asano estate was confiscated and his family line was dethroned from the lordship.

The loyal retainers of Lord of Ako, better known as Ako Gishi, were indignant of this judgment and pleaded for an amendment of the order and the reinstatement of the Asano house. But their requests were dismissed.

Almost two years after the fateful incident, 47 samurais of Ako assembled under the former chief retainer, Oishi Kuranosuke, to avenge their lord's death and the injustice imposed by the shogunate. On December 14th, 1702, they attacked and killed Kira at his residence. They then marched to Sengakuji to present Kira's head to Asano's grave and reported their accomplishment to their late lord.

The Gishi turned themselves in to the shogunate right away and were sentenced to seppuku the following year on February 4th.

The avenge of the Ako Gishi has been made into various plays and is now commonly called “Chu-shin-gura”(The Story of the Loyal Retainers). It is a popular tale and one that still touches the Japanese heart even after 300 years. The chivalry of the loyal retainers and the themes of “Gi” (justice;義) and “Chu” (loyalty;忠) are still highly esteemed by the Japanese. 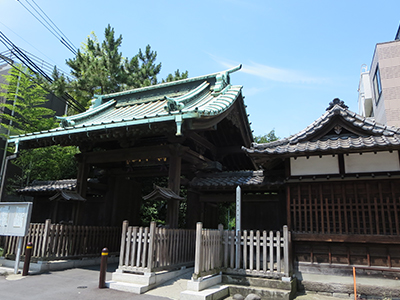