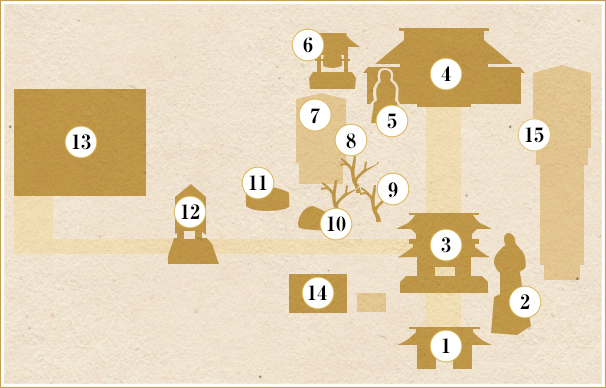 The Middle Gate was reconstructed in the late Edo era under the 35th abbot in 1836.
The script above the gate "萬松山（Banshozan）" written by a Chinese monk is Sengakuji's mountain name and means "mountain of many pines".

The leader of the Ako Gishi or 47 loyal retainers who led the attack on Kira's residence. The statue was built in 1921. He holds a roll listing the name of the loyal retainers.

Rebuilt in 1832 under the 34th abbot. On the Upper floor, there are 16 statues of "Arakan"(Arahats) or Buddhist saints. A bronze dragon can be seen on the ceiling of the ground floor.

Hondo (Main hall of the temple)

The original building was destroyed in the WW Ⅱ. The present construction was built 8 years later.
The main statue is that of "Shakamuni"(Sakya-muni) Buddha (the histrical Buddha). Also represented are statues of Master Dogen and master Keizan, the two principal "patriarchs" of the Soto Zen sect and "Marishi-ten (Marici)", the protecting god of Oishi Kuranosuke.
It is here in the main hall of Sengakuji that the abbot and training monks regularly practice Zazen (Buddhist meditiation), recite sutras and officiate ceremonies.
The characters above the central door "獅子吼"（Shishi-ku） means "Lion's roar" and refer to the teachings of Shakyamuni Buddha which were said to have been uttered with the force and courage of a lion.

Late Sawaki Kodo Roshi is one of the leading and most influential Zen masters of the 20th century.
He dedicated his life to the propagation and revitalization of Zazen as an authentic and fudamental Buddhist practice.

Constructed in 1913 under the 41th abbot. The bell sounds during morning Zazen and in the evening when the gate is closed.

Oishi Kuranosuke's eldest son, Chikara, took part in the attack on Kira Kozukenosuke at the age of 16.
This plum tree was transplanted from the house where he subsequently committed seppuku (hara-kiri).

The nun who took care of the graves of Ako Gishi received this tree from the wife of Asano Takuminokami.

Story has it that when Asano takuminokami committed seppuku i the garden of Tamura's residence, his blood gushed out staining this tree and stone.

After the retainers accomplished their avenge by killing Kira, they marched to Sengakuji to report to their lord's grave. When they arrived, they first washed Kira's decapitated head (kubi) at this well and then laid it in front of their lord"s grave and announced their success.

This gate was originally at Asano's residence but was relocated to the present location during the Meiji era.

The garaveyard of the Ako Gishi. They were buried here after their seppuku on February 4th, 1703.
47 samurais participated in the attack, including the leader Oishi, to avenge their lord Asano Takuminokami's death. However, after the attack, Terasaka Kichiemon was dispatched by Oishi to report on the raid and was subsequently exempted from execution. 46 graves are of those setenced to seppuku.
There are two memorial graves: that of Terasaka and Kayano Sanpei. Kayano strongly desired to take part in the avenge but commited seppuku before tha attack due to strong opposition from his family.
The gravesite is 300 years old.

The hall is the latest addition to the temple, built on the 300th commemoration of the Ako Gishi's avenge. There is a collection of artifacts and historical records on display.
There is also a video presentation. (English version the is available. If you'd like to view it, please contact the staff.)